Published by Robert on 6 February 2020

Yesterday evening, the night watchman on duty noticed suspicious movement inside the cemetery & quickly informed the police. When officers arrived, they chased the trespasser through the rows of tombs & finally apprehended a 28-year old man.

In his backpack were five plaques that had been removed from their respective mausoleums. Two were dedicated to Raúl de Acevedo Ramos, one to surgeon Ricardo Finochietto & the other two are illegible in the photo below:

Obviously an attempt to sell the plaques as scrap metal —theft of metals is a common crime in Buenos Aires— police believe this could be the same person who stole a 300-kilogram marble & metal column from the monument to General San Martín in Retiro in December 2019. The full article by Clarín (in Spanish) also mentions robberies in Chacarita Cemetery.

Note: All photos come from the article linked above & are not property of this blog.

Marcelo & I don’t live in countries where Lonely Planet guidebooks in English are readily available, so it’s always nice to pop into a real bookstore —while they still exist!— to see if our cemetery PDF guide is still recommended. Happy to find good news. The photo above comes from the latest edition (11th, published 2018) of LP’s Argentina guidebook.

Thanks for the continuing support!

Published by Robert on 4 October 2019

Born in Buenos Aires in 1878, Carlos Saavedra Lamas had family roots dating back to the earliest days of Argentina. As great-grandson of founding father Cornelio de Saavedra, perhaps Carlos seemed destined for success. But he did something no one ever expected… Saavedra Lamas became the first Argentine to receive a Nobel Prize.

His career path began as a lawyer & teacher, & in 1908 Saavedra Lamas started in politics as representative for the city of Buenos Aires in Congress. During the presidency of Victorino de la Plaza, he became the Minister of Justice & Public Instruction. Remember that the Victorino de la Plaza administration had to implement universal suffrage when President Roque Sáenz Peña died just after the law had been passed. One other interesting connection: Saavedra Lamas married Rosa, the daughter of Roque Sáenz Peña. But it was his next big government position that would send him into the international spotlight.

As Minister of Foreign Relations during the military-run Agustín P. Justo administration (1932-38), Saavedra Lamas negotiated peace between Paraguay & Bolivia during the Chaco War. At a nexus between four countries, the Chaco region had long been an area of contention. Argentina had most of the power, treating Paraguay as a feudal trade partner. Brazil feared the dominance of Argentina in South America, & Bolivia yearned for an outlet to the Pacific Ocean in order to avoid being landlocked by other nations. Recently discovered oil also played a role in the conflict. Saavedra Lamas persevered to find a peaceful resolution to the war by addressing the League of Nations & at the same time prevented the USA from intervening in what it saw as a “local,” hemispherical dispute.

During the Chaco War, Saavedra Lamas drew up a Treaty of Non-agression & Conciliation (referred to in Spanish as the Pacto Antibélico) which stated that signatories would not recognize any territorial change in the entire hemisphere brought about by an act of war. By 1935, all nations in North & South America —with the exception of Bolivia & Costa Rica— had signed the peace agreement. What an amazing accomplishment in a decade full of nascent dictatorships & warmongering! Six European countries, including Spain, also ratified the treaty. As of 1948, another treaty superseded that of Saavedra Lamas but many nations still recognize the original. In 1936, Saavedra Lamas received the Nobel Prize for Peace, becoming the first Argentine to receive the honor. He passed away in 1959 & was buried with honors in Recoleta Cemetery.

A bitter afternote: The actual medal given to Saavedra Lamas disappeared after his death, then turned up in 1993 in a pawn shop. It passed through several private collectors until being auctioned in March 2014 in Baltimore. A representative in Argentina’s Congress proposed buying it back… but as the second-only Nobel Peace Prize medal ever up for sale, it fetched an amazing price: $1,116,250 USD! Supposedly a private Asian collector now has a symbol of Argentina’s once prominent role in international peacemaking.

On 14 Nov 2018 around 17:15 —less than an hour before closing time— a bomb went off inside Recoleta Cemetery. Marcelo immediately sent me a message via WhatsApp & within seconds I watched the story unfold on TN’s live YouTube broadcast from my living room in Spain: 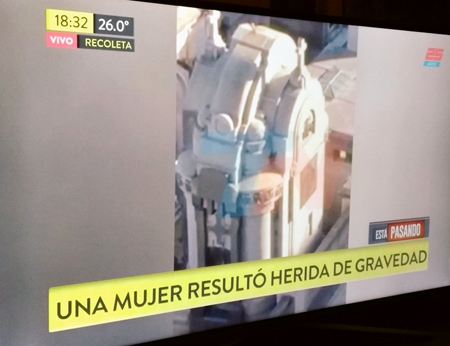 The explosion occurred in the far left corner of the cemetery at the tomb of Ramón Falcón, & initial reports mentioned one of five home-made pipe bombs exploding… severely injuring one woman who was being attended by an EMT crew onsite. Forensic police arrived to investigate the scene as well as assess any potential threat from unexploded devices. Later that day, the following photos were released via the national news agency, Télam: 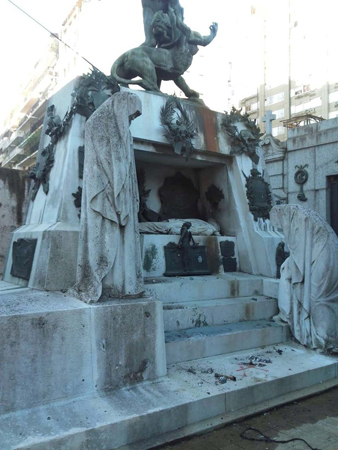 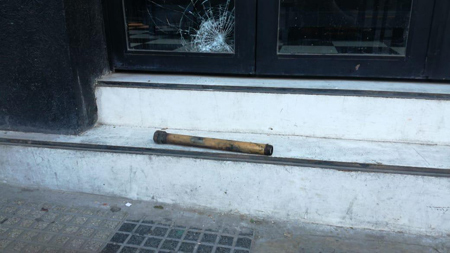 The story wasn’t difficult to put together. The injured woman, 34-year old Anahí Esperanza Salcedo, had been responsible for the bombing & suffered facial damage as well as the loss of three fingers when the device exploded early… apparently while taking a selfie.

Salcedo entered the cemetery with Hugo Alberto Rodríguez, both disguised with wigs & sunglasses. They identify as anarchists & wanted to destroy the tomb of Falcón, who had been assassinated by an anarchist 109 years ago. In the end, the tomb survived while Salcedo remains in critical condition.

Marcelo went to Recoleta Cemetery to assess the situation two days after the bombing occurred. The first change he noticed is that bags are now being inspected at the entrance gate. While we aren’t sure if this checkpoint will become permanent, be prepared to have your belongings searched until further notice. Marcelo also confirmed the correct time of the bombing, misreported in local media as around 18:00… impossible since the cemetery promptly closes at that time every day. Forensic police were still working the scene during his visit: 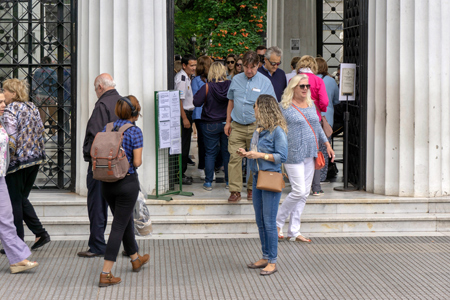 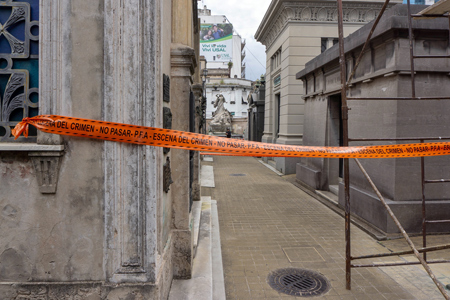 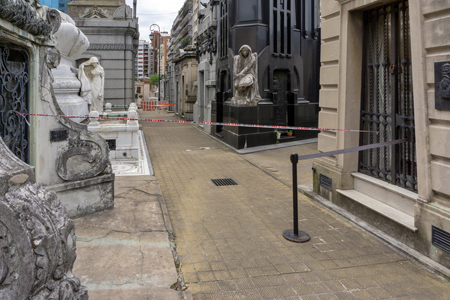 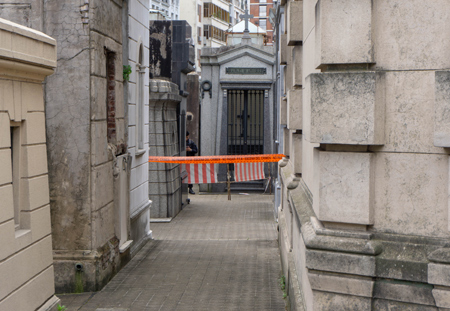 Marcelo also heard people ask in several different languages where the explosion had taken place. Word had quickly spread about the incident. He’ll return next week for an update, so stay tuned! In the meantime, tombs that are located inside the orange dashed line on the map below cannot be visited. This corresponds to locations numbered 41 to 44 in the PDF guide: 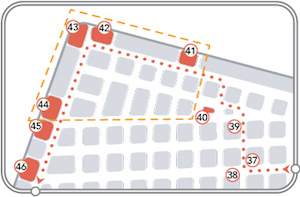 During 19 years of visiting & documenting Recoleta Cemetery, neither Marcelo nor I ever imagined this kind of violence taking place inside. Some speculate that it may be an attempt to disrupt an otherwise calm city preceding the G-20 summit. Whatever the reason, one lesson that Recoleta Cemetery demonstrates through almost 200 years of history is that violence is never the means to an end. And you can’t kill someone twice!

Update (22 Nov 2018): Apparently all cemeteries in Buenos Aires—Recoleta, Chacarita & Flores—will not allow visitors to enter with bags or backpacks, & handbags will be inspected by security. Photo courtesy of Susana Gesualdi: 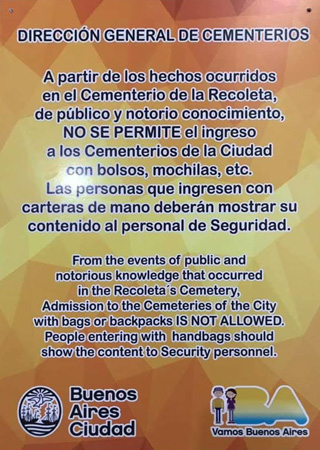 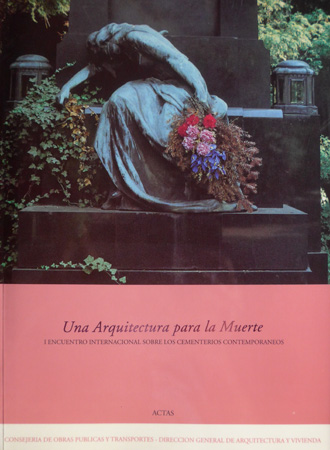 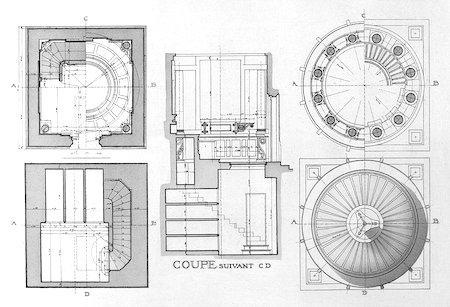