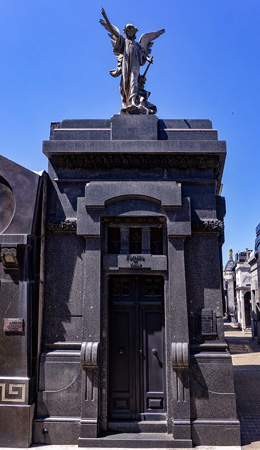 Raúl Barón Biza (1899-1964) was many things: writer, cynic, millionaire, politician, lover, pornographer & a victim of suicide. Many online sources dig into his fascinating life, but for this post we’ll limit ourselves to his first love, her tragedy & her burial.

Barón Biza met his first wife, the Swiss actress Myriam Stefford (née Rosa Martha Rossi Hoffmann) during a trip to Europe, & they married on 28 Aug 1930. Myriam grew bored with her new life running a large cattle ranch, so she began taking flight classes. In mid-August 1931 she announced that she was going to visit all 14 provinces in Argentina by airplane. Below is an excerpt of an interview with Luis Pozzo Ardizzi of the high society magazine Caras y Caretas:

— You’re thinking of using an airplane as your method of transportation?
— Of course! I’m training now to begin a quick trip around this country that I love so much.
— Will this be a groundbreaking trip?
— I don’t know –she says smiling– that will be for you to decide. I’m thinking about flying over all 14 provinces. And I’ll do it in my small B.F.W. airplane, with an 80 horsepower Siemens engine.
— You realize that someone else has already flown over all 14 provinces?
— I do. And with time on my side, I’ll do it as well.
— In how many days?
— She answers, smiling: If I can… in three…
— Does your airplane have a unique name?
— A modest name, because I’m starting this trip modestly. I call my airplane “Chingolo”. I want Chingolo to spread its wings for a breathtaking flight…
— Once finished, are you considering another big trip?
— Yes. I will try to show that a small plane, made for tourism, can do some interesting things.
— …?
— I’d like to try to reach North America…
— That’s a risky undertaking.
— It will be. But I’ve got enough enthusiasm to give it a go.
And after this last sentence, the charming movie star who has mastered all types of sport bids us goodbye to resume her training.
(Caras y Caretas 1715, 15 Aug 1931, pg. 18)

That “modest trip” ended tragically on August 26th, two days before Stefford’s first wedding anniversary. Chingolo II (the first had mechanical problems & had to be replaced with another plane) fell from the skies for reasons that were never known near Marayes in San Juan province. For Barón Biza the news was horrific; for the national media, who loved the aviatrix, it was catastrophic, as reflected in La Nación the next day: 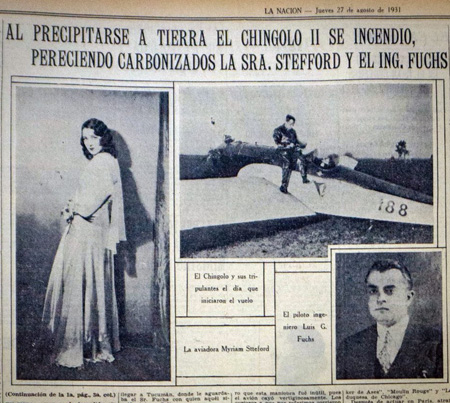 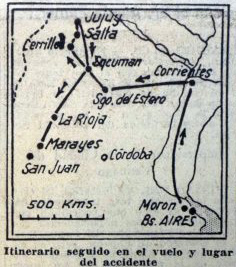 Three days after the accident, Stefford (who was never mentioned as “the wife of Barón Biza”, something rare for the time) & her instructor Luis Fuchs were buried in Recoleta Cemetery. The actress/aviatrix was laid to rest in a mausoleum which then belonged to Wilfrid Barón, the father of Barón Biza. The structure was later sold to the Fabre family, & next to its current owner, the De Viñas family. 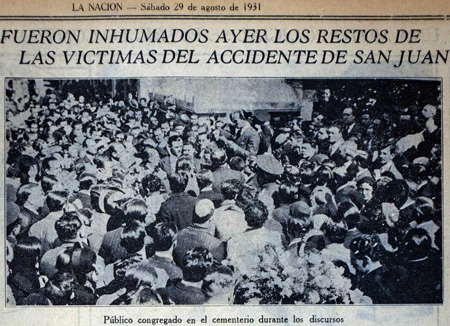 Myriam didn’t stay in Recoleta long, since Raúl Barón Biza immediately ordered the construction of the largest sepulchre in the country: a monstrous vault 82 m tall placed in the countryside of Los Cerrillos, near Alta Gracia in Córdoba province. His friend, the engineer Fausto Regino Newton, designed the concrete monument whose meaning remains unclear to many: Is it the profile of a plane’s wing, as is often said? Is it an obelisk, taller than the one in Buenos Aires as many people from Córdoba proudly claim? Or is it an Egyptian symbol of resurrection? Whatever its significance, Myriam Stefford moved there on 22 Nov 1935 & was placed under several meters of cement… that’s when legends began to circulate. It’s said that she was buried with her jewels, among them a 45-carat diamond named the “Cruz del Sur”, with Barón Biza laying traps to prevent anyone from profaning the tomb—including placing explosives—& on the very top a beacon whose light could be seen for several kilometers. 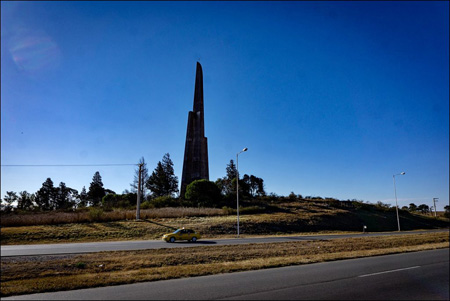 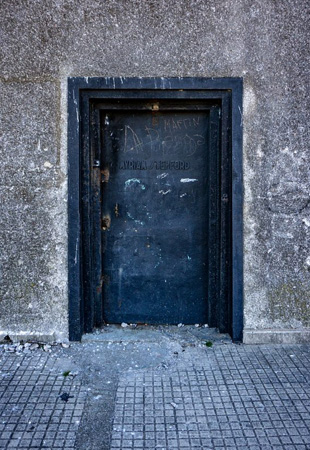 The truth is that the monument remains in place after all these years, after a second great tragedy in the life of Barón Biza: one afternoon in August 1964 in an act of rage, he threw acid on the face of his second wife, Clotilde Sabatini, & immediately afterwards shot himself in the head. He had sold the land where Stefford’s mausoleum sits in Alta Gracia many years earlier.

This is how it looks now, abandoned & alone. A project has been proposed to convert the area into a theme park about the enigmatic writer & his young wife who passed away prematurely. In the meantime, the “wing” attracts the curious, as well as architecture fans & film students… also a number of distraught people who have unfortunately committed suicide by jumping from the tallest window. 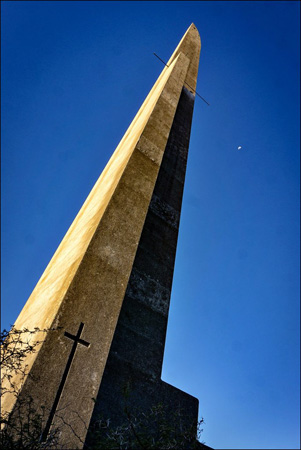 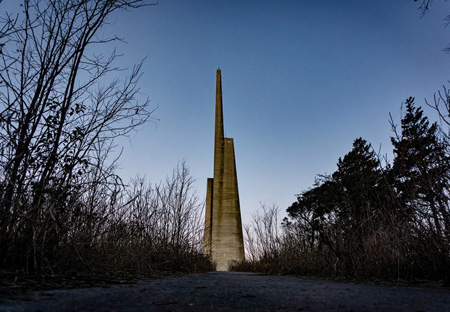 Originally, the monolith displayed the motor of Chingolo II along with many plaques but all have since been removed or stolen. The entrance to the monolith remained opened for many years, but vandalism & attempted profanation prompted officials to solder the door shut permanently. No one now climbs the hundreds of steps to reach the top; supposedly the last time was in 2008. The future of this forgotten monument remains uncertain. 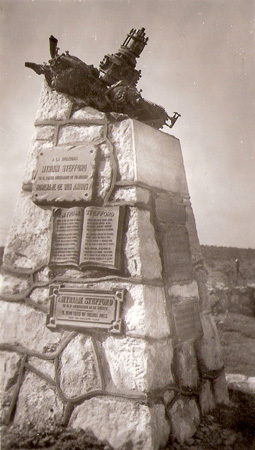 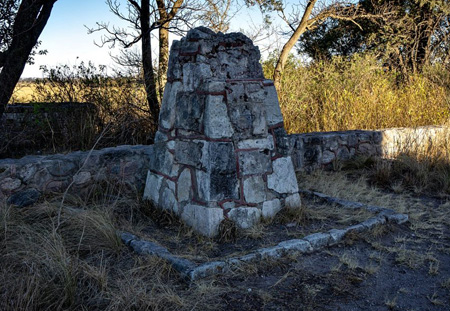 Thanks to co-author Marcelo Metayer for contributing this post. The original version in Spanish (with additional text & photos) can be found on his blog: El Navegante Solitario. 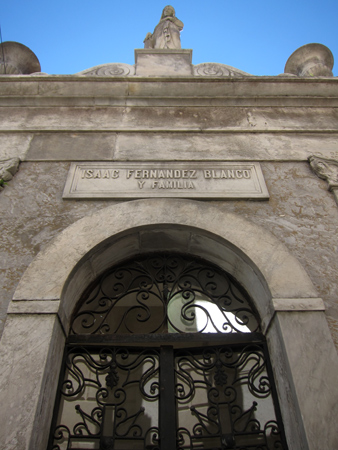 Born in 1862, Isaac Fernández Blanco came from a family with an extensive history in the city of Corrientes. Isaac’s grandfather, Ángel, fought during independence wars against the Spanish but later moved to Buenos Aires, switching interests from politics to business.

In 1895, Isaac began to spend the family fortune on an impressive collection of Spanish colonial art. Even though an engineer by trade, his passion for period objects transformed the family house into a museum which eventually opened to the public. Isaac remained the museum’s honorary director until one year before his death in 1928. 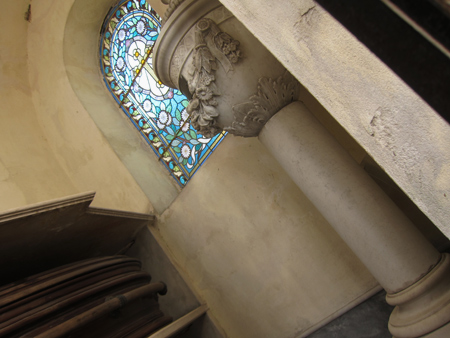 Family members continued to add to Isaac’s collection, & in 1947 the museum found a new location: the Palacio Noel. The Neocolonial residence built by architect Martín Noel serves as the perfect backdrop for the collection: 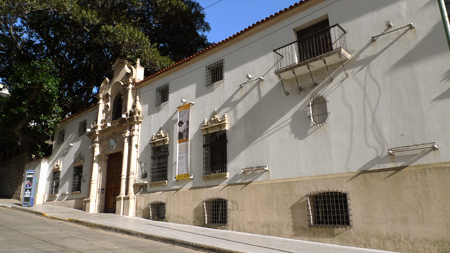 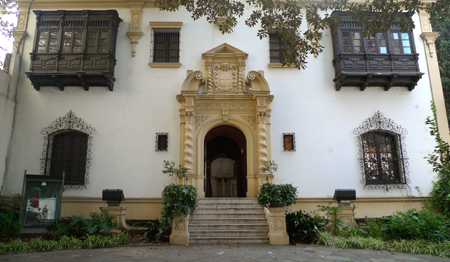 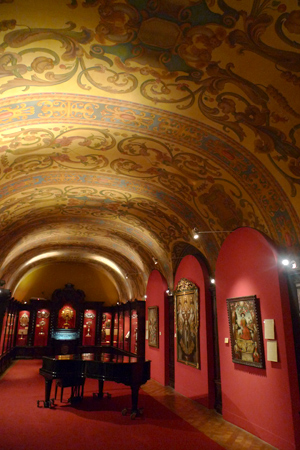 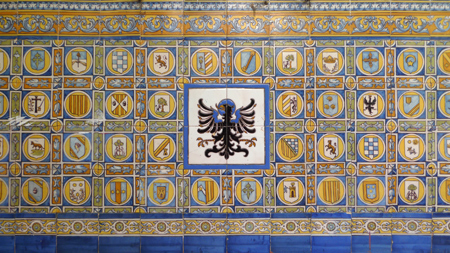 Also buried in the family mausoleum is Naír Mercedes Fernández Blanco de Gowland, who founded the Asociación Guías Argentinas in 1953… during the last years of her life. The AGA is the local equivalent of the Girl Scouts, & a plaque reminds passersby of her contribution to Argentina: 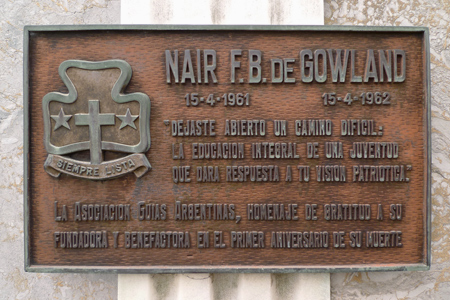 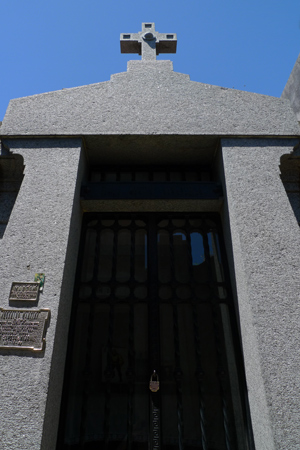 Born in Buenos Aires in 1922, Karadagián used his father’s heritage for a nickname in the professional wrestling world: the Armenian. After retiring from Greco-Roman wrestling, he switched to acting… playing a wrestler down on his luck in the 1957 film “Reencuentro con la gloria.”

These two worlds would come together when Karadagián began the tv show Titanes en el Ring in 1962. Similar to what Americans recognize as the World Wrestling Federation, Karadagián occasionally fought but often kept to the role of announcer. The show remained on the air until 1988, & Karadagián passed away a few years later in 1991. 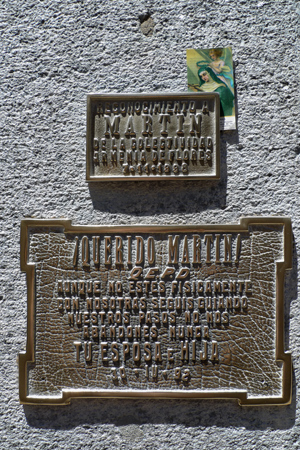 Although there is little to identify his tomb, two bronze plaques express sorrow at Karadagián’s departure. These type of plaques are more often found in Chacarita Cemetery, so they are even more endearing here. A peek inside shows the wrestler with his unmistakeable haircut: 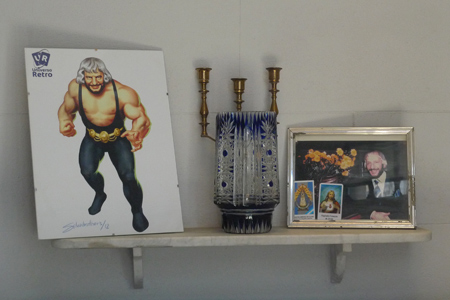 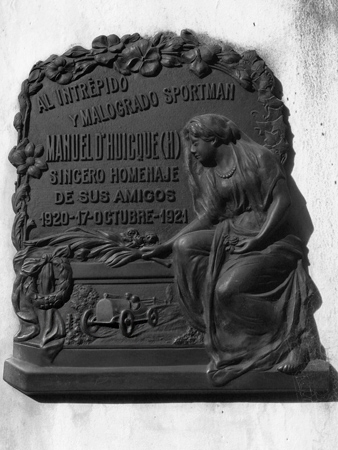 The first Manuel d’Huicque came from France & imported coffee from Brazil. Although several establishments were located in Buenos Aires, perhaps the most famous was Café La Brasileña located along the old Rambla of Mar del Plata. Apparently his son (“h”=hijo) had a fondness for sportscars!