Published by Robert on 28 September 2022

Located on a prominent corner near the far-right section of the cemetery, the family mausoleum of Antonio Gonçalves Borrega has always been a bit of a mystery. Plaques say one thing while imagery shows another…

Reliefs with medical scenes decorate the top: the left panel appears to be a surgery or perhaps an autopsy, while the right panel looks like Asclepius healing a sick person. The original occupant must have been a physician, but new owners occupied this mausoleum in 1950.

One plaque is dedicated to the wife of Antonio, Joaquina da Conceição Braz, & another names Antonio as the owner of a fábrica de envases… this would most likely be a glass bottle factory or perhaps factory that produces packaging like containers, boxes, etc.:

The 1942 Anuario Kraft —a huge guide to regional commerce— mentions the Gonçalves factory was located at Calle Venezuela 538 in Buenos Aires. Other attempts to find business references have turned up nothing.

One other source states the mausoleum first belonged to “Dr. Ferrari,” but we have no proof to confirm or deny that claim. Finally, we’ve always wondered if the bust above is of the previous owner or of Antonio??? Yet another Recoleta Cemetery mystery to be unraveled…

Signed by Italian architect Aldo Antonio Gaetano Flándoli, this striking Roman temple replica fails to attract much attention from visitors due to its location: a small walkway off a main path. The grandeur is also difficult to appreciate in such tight quarters but fortunately we have some artwork at eye level to appreciate.

Statues in the triangular pediment above as well as two door reliefs below are signed by another Italian immigrant, Troiano Troiani. The four Evangelists —Mark, Luke, John & Matthew— with their corresponding symbols flank larger depictions of Jesus & Mary. The descent of Christ from the cross is also shown in a lower center relief. Other works by Troiani in Recoleta Cemetery include a massive statue topping the Familia Manuel Cerini tomb as well as sculptures for the Familia D’onofrio. These are no less spectacular:

My main question is who are the Peiranos & how did they afford such a luxurious final resting place? Instinct leads me to believe they are part of the Uruguay-based Peirano family, known for owning a huge number of businesses in South America including banks, public transportation plus supermarket chains Santa Isabel in Chile & Disco in Argentina (often gathered under the Grupo Velox brand). Uruguayan courts found three of four Peirano brothers guilty of money laundering & fraud in 2013… but are their relatives here in Buenos Aires?

The only plaque on the mausoleum lists four burials from the mid-20th century, with no trace of anyone on the internet. If you have information about Elitreo Strucchi, Margarita D’Abové de Peirano, Antonio Peirano or Luisa Subazzoli de Strucchi —or any of the Peiranos— please let us know!

Juan Bautista Mignaquy exemplified the entrepreneurial spirit of the early 20th century in Argentina. Seemingly with a hand in every pot, successful business ventures gave Mignaquy a great deal of influence… but surprisingly few people remember his contributions to a growing nation today.

Born in 1859 in the French Basque Country, a young Juan Bautista arrived alone in Buenos Aires at the age of 12 or 13 & began to work for Luis Logegaray, a fellow Basque who had established a successful wholesale & warehouse business. Following in his mentor’s footsteps, Mignaquy became part of Logegaray’s association & kept offices in downtown Buenos Aires for 70 years.

Much of his success would come from dedicated night study sessions, encouraged & supported by Logegaray. That hard work paid off when Mignaquy was accepted to the Colegio San José —founded by French Basque missionaries— and had classmates who would later go on to make names for the themselves as well: Luis María Drago, General Enrique Mosconi, Tomás Duggan & Jacobo Peuser to name a few.

After the death of Logegaray, Mignaquy went to Paris & lived there for two years with Logegaray’s widow; no doubt he saw her as an adopted mother. Besides maintaining the import & distribution business, Mignaquy would return to Argentina & occupy several important positions on the local & national level, many noted by plaques which decorate his family mausoleum. He passed away in 1940 but is remembered by the Provincia de Buenos Aires bank where he sat on the directive board:

Mignaquy acted as President of the Buenos Aires stock market in 1902 & also had a top position in the El Comercio insurance company:

A reminder of Mignaquy’s French roots are present with a plaque from a prominent Basque organization:

He also acted as director of Cusenier, an importer of distilled French beverages & cider. He also imported the popular vermouth Cinzano from Italy:

As if those accomplishments were not enough, Mignaquy founded a trolley company that connected Retiro to the southern suburbs of Buenos Aires. In 1930, one of their trolleys fell into the Riachuelo when the conductor failed to see red lights in the fog that indicated Puente Bosch had been raised. Almost all 60 passengers on board died. You can imagine the city’s shock. A few tracks of that trolley line still exist, but the largest vestige of the Mignaquy trade empire sits abandoned in La Boca, waiting for restoration & for someone to take advantage of its prime location… directly across from La Bombonera. At least this warehouse keeps his memory alive:

Armenians first arrived in Argentina during two periods in the early 20th century, either escaping a horrendous genocide beginning in 1915 during World War I or a continued massacre by the Turks in 1921. Although no accurate numbers exist, an estimated one million people were murdered by the end of violence in 1923.

Born in Marash, Akrabian’s father died defending a German orphanage where various Armenian families had gone for safe haven. Inside the orphanage also happened to be his future wife, Luisa Naldjian… but they wouldn’t meet until much later. Akrabian & other family members managed to escape to the State of Aleppo, but he left in 1924 on a ship bound for Buenos Aires.

Eventually Akrabian found work at a shoe factory where Luisa Naldjian worked. Her father happened to be the owner, & they’d arrived in Buenos Aires one year earlier. Sounds like fate! They married in their early 20’s, opened their own shoe factory together & became very active in the Armenian community in Buenos Aires. Most Armenians settled in the neighborhood of Palermo where self-help organizations opened & restaurants thrive to this day. One reminder of this community is a monument in the Plazoleta Monte Ararat (Charcas 3500):

In the 1960s, Akrabian purchased the Wilton Hotel in Barrio Norte, near the intersection of Callao & Santa Fe. Flying flags of Armenia & Argentina, the hotel became a hub for Armenians visiting from abroad. Unfortunately flags of other countries are now mixed in with that of Armenia, but I had friends visit in 2003 & stay there… at that time the original flags still flew:

His wife, Luisa, passed away in 2015 at the age of 100 & is also buried here. For more information about this important family, read this post on the Aurora Prize website. 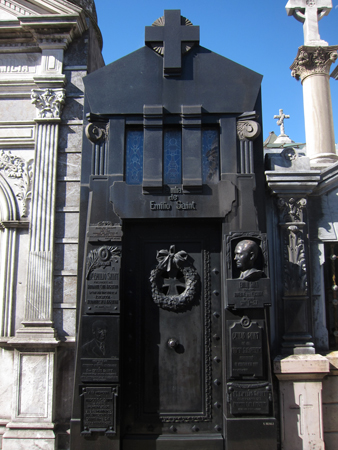 Roasting coffee beans & making chocolate turned French immigrant Abel Saint into one of the most successful entrepreneurs in Buenos Aires. His business which began in 1880 grew quickly & after a couple of moves around Buenos Aires, the main factory for El Águila settled in the neighborhood of Barracas. Unfortunately Abel passed away two years before the factory opened in 1894, leaving the company to his son, Emilio. 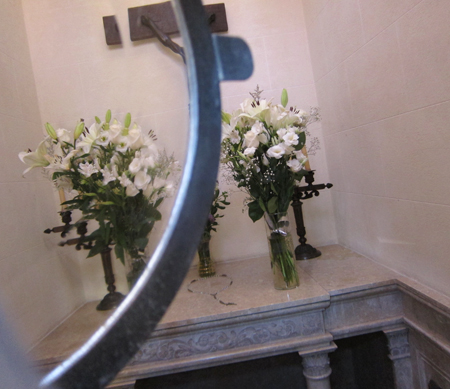 In 1905—less than ten years after taking charge of the company—Emilio launched another factory in Uruguay as well as began exporting chocolate to Paraguay. Águila continued to diversify under Emilio’s direction (with over 100 different products!) but gained fame from making chocolate tablets that could be broken into bars… perfect for the classic hot chocolate beverage called a submarino.

For most of the 20th century, Águila did very well & became a hallmark, national brand. But diet fads of the 1980s reduced the consumption of chocolate, & the company was sold to food industry giant Arcor in 1993. However Arcor maintained the Águila brand, & it continues to be one of the most popular chocolates in Argentina. Much of the main factory has been demolished, but a few remnants exist to keep the memory of the Saint family alive: 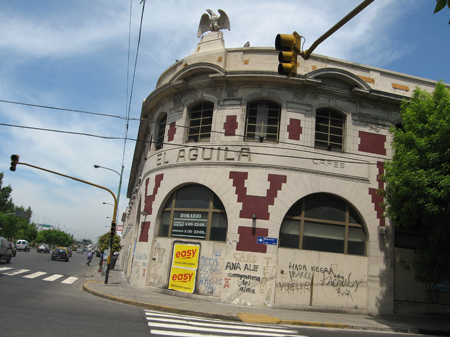 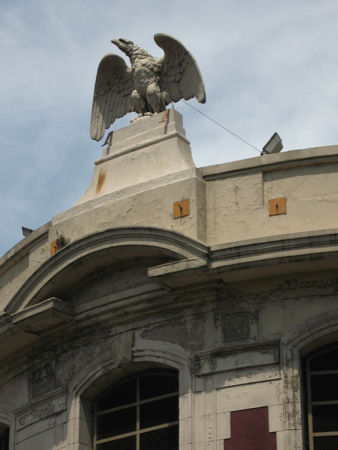 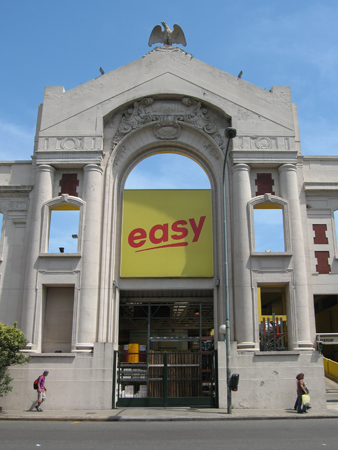 Besides his involvement with the family business, Emilio Saint became president of the Automóvil Club Argentino from 1931 until his death four years later. He oversaw one of the most difficult eras for ACA, following the 1929 world economic crisis. Under Saint’s leadership, the club transformed from being composed of purely elite members to include anyone who had a passion for cars. Emilio also invested heavily in real estate, commissioning one of the most remarkable Art Deco skyscrapers in the city: the Torre Saint. An upper-level was dedicated to rooms for the tenants’ personal drivers… easy to understand given Emilio’s love of cars! 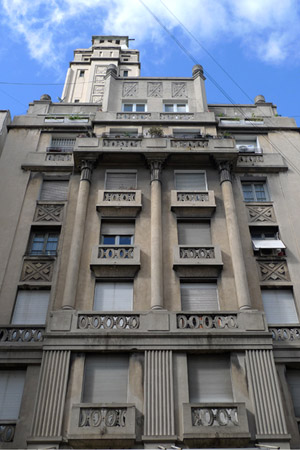 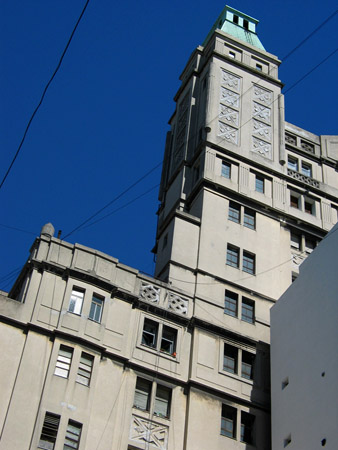