As the coronavirus makes its way to Argentina, staff at Recoleta Cemetery are taking preventative measures to ensure everyone’s health & safety. As of 13 Mar 2020, the cemetery is CLOSED until further notice to all tourists. Below are two official communiques from Recoleta Cemetery:

We’ll let you know when they reopen, but in the meantime feel free to take a virtual visit by scanning through over 550 posts on this blog. More important: stay healthy & respect recommendations by health care officials. Recoleta Cemetery will be waiting for you when this health emergency ends!

Update (Dec 2021): Recoleta Cemetery is now open for all visitors & with regular hours of operation! 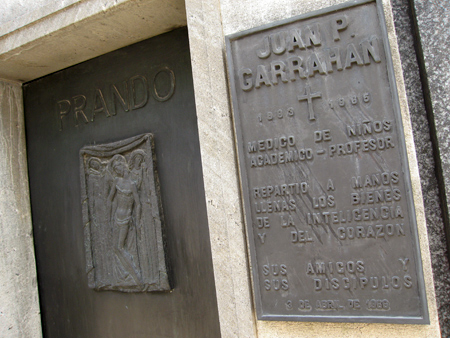 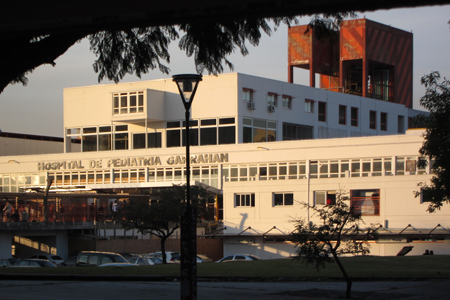 Published by Robert on 17 September 2011 Although plain & simple by Recoleta standards, this family vault contains two of the greatest surgeons in Argentine history. Enrique Finochietto entered medical school in Buenos Aires at the age of 16 & earned his degree with honors in 1904. After spending some time as a surgical intern specializing in skin & venereal disease, Enrique took his first trip to Europe to learn new techniques, brought them back to Argentina & was named head of surgery at Hospital Rawson. He would not sit still for long.

Enrique returned to Europe during World War I, meeting Marcelo T. de Alvear in Paris, where they jointly set up a hospital for the wounded. The French were so grateful that they awarded Enrique the Legion of Honor medal. Returning to Buenos Aires, the Finochietto brothers opened the new, cutting-edge surgical wing of the Hospital Rawson & Enrique began inventing surgical instruments… among them the frontolux, inspired by a miner’s head gear. After a long history of medical accomplishments, Enrique succumbed to syphilis in 1948. Enrique’s younger brother, Ricardo, followed in his footsteps but was more geared toward teaching than inventions. He traveled to the United States in the 1930’s & implented the system of residency in Argentina by establishing a surgical school specifically for recent graduates to improve their technique.

In 1950 while head of the Polyclinic in Avellaneda, Ricardo was designated as Eva Perón’s head physician. With an advanced case of uterine cancer, he could do little to ease Evita’s pain & was present when U.S. surgeon George Pack performed a hysterectomy. In the 1952 photo below, Ricardo appears on the far right. After the Revolución Libertadora which ousted Perón, Ricardo’s ties with the previous administration prevented him from working in the public sphere. He passed away in 1962. What remains unclear is why Enrique & Ricardo Finochietto are in this particular family vault. Since the mausoleum is not in their name, perhaps it belongs to a family member by marriage. Stay tuned for updates! Update (21 Oct 2011):  The third Finochietto brother, Miguel Ángel, was also a surgeon & worked alongside Enrique at the Hospital Rawson. He, too, is buried in Recoleta Cemetery but in a different vault… the exact location of which is still unknown. While searching through my thousands of Recoleta Cemetery photos, I stumbled across the following plaque for Miguel Ángel (photo from 2007): Despite three attempts, I haven’t been able to find this plaque again in the cemetery. Today, I talked with one of the caretakers in the area where he should be buried (judging from the photos I took before & after) & most likely the vault for Miguel Ángel was recently sold. Still have to confirm with Administración, but it seems likely that he has moved to another cemetery. Born in San Juan in 1821 to a US immigrant father & a criolla mother of Welsh descent, Dr. Guillermo Rawson exercised enormous influence during the early years of Argentina. Completing medical studies in Buenos Aires with honors in 1844, Rawson returned to San Juan to set up his own practice but also became involved with politics. Opposing Rosas & at times even at odds with Urquiza, Rawson returned for good to Buenos Aires in 1861 where he was given a seat in the Senate.

So much was happening in politics at the time & Rawson landed in the middle of it all. After reinstatement of Buenos Aires in the Confederation following the Battle of Pavón, one of the biggest issues became where to place the national capital. Many Senators were against the idea of Buenos Aires due to the Rosas era & subsequent conflict, but Rawson argued that national & local powers should share the same space in BA temporarily… a way to heal the wounds & learn to work together. His plan worked until 1880 when the city of La Plata was created to govern the province. In 1862, President Mitre elected Rawson as Minister of the Interior. He was responsible for approving construction of the first train lines in Argentina. Another of Rawson’s major projects—likely because of his family history—was granting permission for Welsh colonists to settle in Chubut. As a result, they named the settlement after him (Trerawson in Welsh, or “Rawson’s town”), & it is now the provincial capital. Disputes with Domingo Faustino Sarmiento & Rufino de Elizalde would cost him a bid for the Presidency, but Rawson remained in national politics by serving in the Congress. His focus returned to medicine during the later part of his life, studying epidemics & health demographics… perhaps because of the death of his brother, Benjamin Franklin Rawson, during a yellow fever epidemic in 1871. In 1880 along with fellow doctor Toribio Ayerza, Rawson founded the Red Cross in Argentina. Dividing time between teaching, research & trips to France for a cataract problem, Rawson died in Paris in 1890 with barely a cent to his name. His remains were returned to Argentina two years later & eventually placed in a crypt in Recoleta Cemetery.