With most of the production of yerba mate—a traditional, South American bitter tea—originating in Paraguay & Brazil, several foreign companies supplied Argentina’s demand throughout the 20th century. Plaques on the mausoleum are dedicated to the most influential president of the Empresa Mate Laranjeira, native Brazilian Ricardo Mendes Gonçalves: Responsible for the distribution of the Cruz de Malta brand, the main warehouse was located in the neighborhood of Barracas on the edge of San Telmo & La Boca. Although warehouse facilities were later moved outside the city limits, the building still remains & occupies its own city block. It appears to have been purchased & interior renovation is currently underway… lofts or a hotel may be coming soon. Update (Oct 2009): All the fine iron work has been removed & the restoration project completed. Nothing as fancy as a hotel, the building is now used as office space for HSBC. 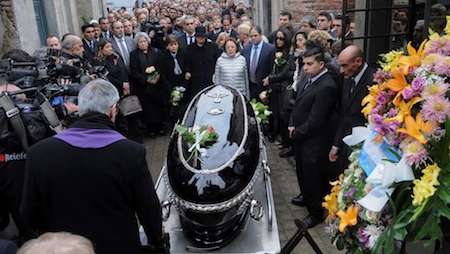 As with most European families, Argentine-born sons were often named after their father, so there are actually two David Spinettos buried here. One was born in Genoa, immigrated to Argentina, & opened the first wholesale fruit & vegetable market within the city limits of Buenos Aires in 1898. Located in the center of town, it did a booming business. David’s plaque is on the left. On his death, the Mercado Spinetto was run by his son-in-law, Juan Sanguinetti… seen on the plaque on the right.

Unfortunately a wave of privatization in the 1990s shut the market down. Today only its shell remains —the interior gutted & occupied by a megachain supermarket:

Son David, born in Argentina, left his mark as well. He became a doctor but instead of practicing, opted for administration. He ran the Hospital Italiano & dedicated his life to promoting Italian culture. It’s not surprising that this spectacular door was imported from Milan in 1912… don’t miss the inscription on the lower left corner:

Magnificently Art Nouveau, the crown of thorns with a serpent intertwined at each corner has been turned into a decorative frame for St. George killing a dragon —a symbolic representation of the devil. St. George was a Christian soldier, born in Turkey & martyred around the year 300. As one of the patron saints of Genoa where the Spinettos hailed from, they pay a spectacular tribute to their homeland. Hands down, this gets my vote for Best Door in the entire cemetery.

The vine design surrounding the exterior cross is repeated inside… although it’s difficult to peek through small gaps in the St. George door. Another Art Nouveau-inspired image visible is a bat just above the altar. A creature of the night, what better animal to watch over the residents of a cemetery?

Update (25 Jul 2020): A reader from Italy (original comment below) has discovered that Milanese sculptors Carlo & Luigi Rigola designed that spectacular door for Palanti. In addition, they did the current doors for the Milan cathedral & many other works inside. An overview of their works together, including funerary sculpture, can be found on this website (in Italian). Grazie Carlo!!

The three Terrabusi brothers arrived in Buenos Aires from Italy at the end of the 19th century & by 1911 had become entrepreneurs. Their cracker business was so successful that it eventually became one of the leading food companies in Argentina. The original logo depicts a woman walking with an umbrella in one hand & a tin of Terrabusi crackers in the other. Supposedly Ambrosio Terrabusi was sitting in a café one day, saw this girl & invented the logo/company slogan, “Not even the rain stops people from buying Terrabusi crackers.” Thanks to a former blog titled soncosasmias for the story & image below:

Most Argentines over 20-years old identify with the company because of their famous Manón crackers… a staple in every kid’s lunch box: However, the company did not survive the wave of privatization in the 1990s. Carlos Reyes-Terrabusi sold the company in 1994 to Nabisco which in turn sold it to Kraft. Today, Kraft headquarters in Argentina now occupies what was once the Terrabusi main office. The sale price was a few million dollars, so Carlos now leads a luxurious life dedicated to polo. His team, La Picaza, won the 2007 Argentine Republic Cup. That’s him on the left: It makes sense that one day he’ll end up in Recoleta Cemetery. The family has a modest, black granite vault from the exterior, but the interior holds a surprise… one of the most beautiful & sensual stained glass panels I’ve seen. Ever. Restoration work is currently being done, so I was able to get a shot with the door removed: Naturally, one of the top silversmith families in Argentina has their family tomb in Recoleta Cemetery. They’ve dealt primarily in housewares (jars, vases, cutlery & the like) since 1887, but the font used for the business name is distinctly Art Deco:

Their largest store is on Avenida Santa Fe with a smaller locale across from Galerías Pacífico on Calle Florida: Located on one of the diagonal avenues not far from the center, the Lappas family vault takes a triangular shape. While it may not be covered with silver, the font is easily recognized: