Neglected & forgotten, the final resting place of Ángel María Zuloaga remains unnoticed by most. A few plaques alert to his skill in aviation, but only one mentions Zuloaga’s 1916 record-breaking trip across the Andes by hot air balloon with Eduardo Bradley: Quite a personality in his own right & not a mere sidekick to Bradley, Zuloaga traveled the world & was considered an expert in aeronautics. In his 20s, Zuloaga served as military attaché to France during World War I & later spent time in Washington, DC as a military advisor. He could have even been the first to cross the Atlantic by plane, but the Argentine government failed to back Zuloaga’s request for assistance three years before Lindbergh’s historic flight. Foreign Minister Bernardo de Irigoyen told Zuloaga, “If man was meant to fly, God would have given him wings.” At this point, Zuloaga had to choose between his Air Force career or going it alone across the Atlantic… he remained in the military.

His youngest daughter described him as “loving but disciplined” & fondly remembered his great love of art & friendships with Benito Quinquela Martín & Luis Perlotti. During a visit to Europe as World War II began, Zuloaga was invited to speak with Hitler but refused to go. He was, however, on friendly terms with Franco. Zuloaga added to his legacy by penning a history of Argentine aviation in 1948 titled “La Victoria de las Alas.” At present, I’ve been unable to determine how Zuloaga was buried here but I’m assuming that the Martínez family was related to his wife in some way. Any further info would be appreciated. With no nameplate on the skinny vault & stuck in the middle of a narrow corridor, it’s easy to miss one of the greats of Argentine aviation.

Coming from a long line of Irish-American intermarriage in Argentina, Eduardo Bradley was born in the city of La Plata in 1887. His fascination for the sport of aeronautics led him to become friends with Argentina’s first & foremost aviator, Jorge Newbery.

Newbery died in an attempt to cross the Andes by plane in 1914, but two years later Bradley made it… not by plane but by hot-air balloon. No small feat for the time. The Andes are the second tallest mountain chain on Earth after the Himalayas, & temperatures reached a low of -34ºF during Bradley’s trip. He & co-pilot Ángel María Zuloaga departed from Santiago de Chile & landed in Mendoza in 1916.

Plaques from 1966—commemorating the 50th anniversary of Bradley’s flight—are the only reminder left. Most people have no idea who Bradley is today. He passed away in 1951. Everyone jokes & says Firpo is wearing his bathrobe, but you probably wouldn’t say that if he was standing in front of you… that’s a life-size replica of the man himself by sculptor Luis Perlotti.

This big guy, over 6.5 feet tall & 220 pounds, was Argentina’s first world heavyweight boxer. His size & strength earned him the nickname “El Toro Salvaje de las Pampas,” The Wild Bull of the Pampas. He fought against every major name in boxing in the 1920s, but his most famous fight was in 1923 against Jack Dempsey in New York City.

Firpo was pummeled by Dempsey but managed to get some good punches in. He even knocked Dempsey completely out of the ring, feet flying in the air. The photos below are from the October 1923 edition of The Ring & titled, “Thrilling Moments in the Most Sensational Heavyweight Championship Bout in Modern Ring History”: Down for a count of 8, Dempsey was helped back into the ring then proceeded to knock out Firpo. Many speculate that the match was fixed & help from newspaper reporters should have disqualified Dempsey. Regardless, when Firpo retired he had an amazing record of 32 wins out of 38 fights. He passed away in 1960 & is still revered as one of the greatest boxers in history. Compare your hands to his & be the judge: Update (24 Oct 2011): Finally found a decent video of the entire fight… it’s only 7 minutes long but amazing to watch:

Unfortunately removed from YouTube in 2019, but we’ll continue to look for another version to link here.

Update (24 Jan 2012): While doing a bit of research in the Biblioteca Nacional, I stumbled across an interesting article from the Buenos Aires Herald in Oct 1937. After retiring from boxing, Firpo got into ranching & raising livestock… apparently not all of his business dealings were exactly legal: Luis Angel Firpo, the well-known boxer and one-time challenger for the world’s heavy-weight title, is on the “wanted” list of the city police, accused of fraud. he thus returns to prominence in the public eye after a prolonged eclipse, only broken by his unsuccessful attemp to stage a “come-back” last year, when he was given the beating of his life by a Chilean boxer, Godoy.

The case relates to the alleged fraudulent sale of a piece of land in San Luis, and in a previous trial, which has now been declared null and void by the Criminal Court of Appeal, he was acquitted. The Appeal Court decided to reprove Judge Ceballos for his negligent handling of the case.

The land belonged to the creditors in the bankruptcy of Ernesto Guillermo Germán Schroeder, and the auction took place in Villa Valeria on December 26, 1932.

Persons present at the auction declared that the land had been purchased by Sr. Juan Fortabat for $306,000, but when the auctioneer, Enrique Manduca, rendered accounts in the bankruptcy proceedings, he gave the name of the buyer as Camilo Paolella and the sale price as $151,000. The sale was approved in the Court of Judge Varangot with extraordinary celerity, and the land was immediately transferred to Firpo, for the sum of $220,000.

A representative of the Bank of the Nación, one of the creditors, however, claimed that the whole proceedings were a “put-up job” to defraud the creditors, and the public prosecutor, who held the same view, demanded 15 years’ imprisonment for Manduca; six years for the trustee in the bankruptcy proceedings, Echart; four years for Paolella; five years each for Fortabat and José Genta, who was implicated in the mock auction; and three years for Firpo.

Judge Ceballos, considered that only Manduca and Etchart were guilty, and he sentenced them to four and two years imprisonment respectively for attempted fraud.

An appeal was lodged by the prosecution, pointing out that the judge had omitted to take into consideration a number of facts relating to the case, and the result is that a re-trial has been ordered by the Criminal Court of Appeals, which severly criticised Dr. Ceballos.

Orders were issued yesterday for the arrest of Firpo, Paolella, Genta and Fortabat, but the police advised that none of them could be found at their homes. The case will now be tried by Judge Goyena.

Update (08 Feb 2012): Even more content keeps appearing online. Check out these two photos… unfortunately I don’t have any source info. But at least there’s more proof that the statue in the cemetery is indeed life-size: 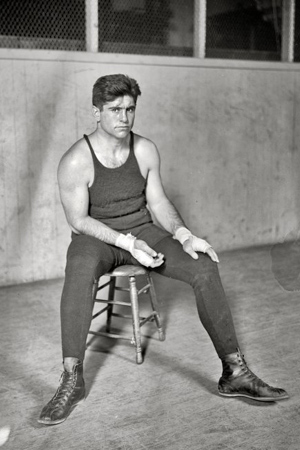 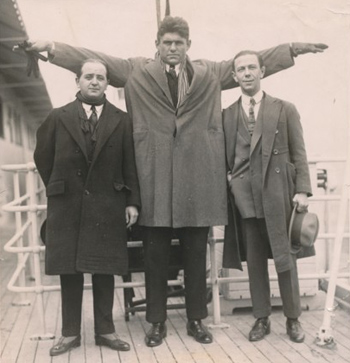 Update (10 Dec 2012): In 1924, celebrated US artist George Bellows depicted the famous Firpo-Dempsey fight, & the painting below hangs in the Whitney Museum of American Art: 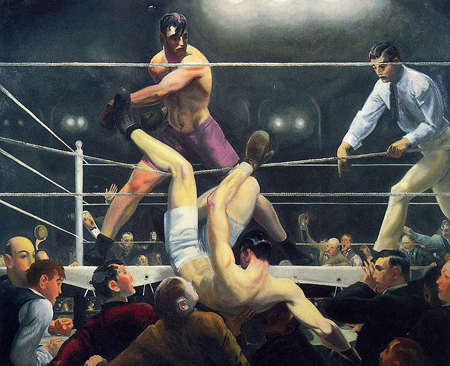 Update (21 Apr 2014): Amazing that new info about Firpo continues to emerge online. British Pathé just uploaded their entire collection of newsreels to YouTube. Among thousands of videos is a 27-second reencounter of the two fighters in 1954… over 30 years after the legendary match: