Three groups of niches can be found against the walls of Recoleta Cemetery. Closest to the entrance, group #1 is the fanciest of them all. It consists of a small, Art Deco sanctuary with two gates & no public access. Built by architect Bruno O. Fritzsche in the late 1920s for a cost of 180,000 pesos, these niches were part of a city-wide project to increase the number of burial spaces available in Buenos Aires. All sketches courtesy of Historia Digital:

Decoration consists of pairs of inverted torches & a couple phrases in Latin. One reads Aequo pulsat pede which is taken from the odes of Horace. The full sentence Pallida mors aequo pulsat pede pauperum tabernas regumque turres translates to “Pale Death with impartial step knocks at poor men’s hovels and princes’ citadels.” In other words, death doesn’t discriminate based on wealth or status… we’re all equal: Another bit of wisdom from Horace is over the second gate. Non omnis moriar means “I shall not wholly die.” The memory of a loved one never truly fades away: Peeking inside, a staircase leads to more niches underground & still more Latin. But this time it’s from the Book of Job 8:9… Our days upon Earth are but a shadow: Group #2 is in desperate need of repair. Most of the lower covers have broken over time leaving caskets exposed. Makeshift covers of sheet metal keep the elements at bay until restoration work can begin. A corner addition in the 1920s (also by Fritzsche) means there’s even more room below ground: 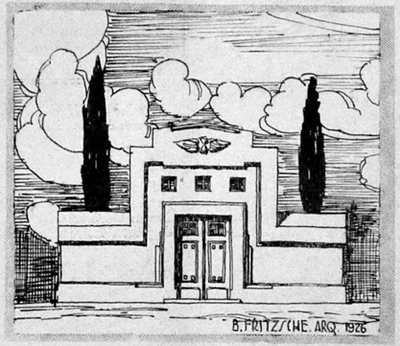 Group #3 is the largest & occupies a big portion of the south wall. Whereas the other two groups place caskets lengthwise, this one can fit many more by inserting caskets the opposite direction: When a wall of niches is this tall, ladders can’t be used by caretakers to access the upper rows. So how to they get those heavy caskets to the top? The answer is right here… A chain pulley on wheels. It must take a lot of effort since the pulley is manually operated, but no one said being a caretaker was easy: