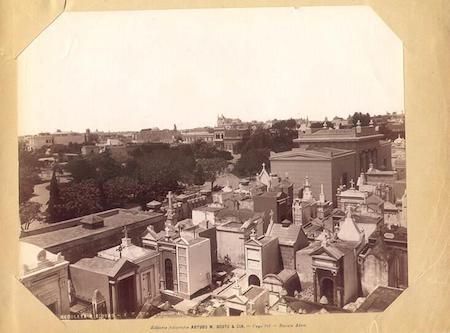 Photo by Arturo W. Boote, exact date unknown but sometime around the end of the 19th century. From the angle, this photo was likely taken from the adjacent Iglesia de Pilar, perhaps from the bell tower.

Samuel Boote (1844-1921) y Arturo Woods Boote (1861-1936) were brothers, both first generation Argentines of a large English immigrant family. Raised on ranches in the Provincia de Buenos Aires, they eventually moved to the capital & became the most famous photographers of the 1880s. A decade later they had traveled through much of Argentina, leaving a valuable photographic record for us today. By 1900 both brothers left the photography business to pursue other ventures, but at least they left a reminder of what they experienced at Recoleta Cemetery over 100 years ago.