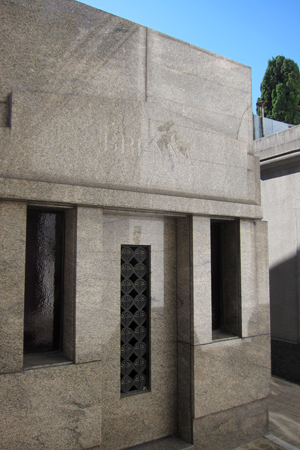 One year before Recoleta Cemetery opened, a flour mill & its corresponding shop for baked goods began operation in 1821 at the intersection of Rivadavia & Rodríguez Peña. Almost four decades later, it became known as the Confitería del Molino. The business was acquired in 1886 by Gaetano Brenna who had a clear vision of making the best sweets in Buenos Aires. 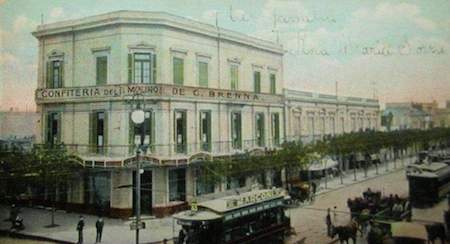 Part of Brenna’s business plan included expanding his facilities. Purchasing two buildings & a warehouse at the intersection of Callao & Rivadavia, Brenna hired immigrant Italian architect Francisco Gianotti to join the three structures & build up, up, up. Gianotti wasted no time during the six years he had been in Argentina, already having built several apartment buildings & just completing the Galería Güemes the previous year. He was definitely one of the star architects of the moment. Brenna made Gianotti promise not to interrupt normal, day-to-day business of the confitería & the results were spectacular. 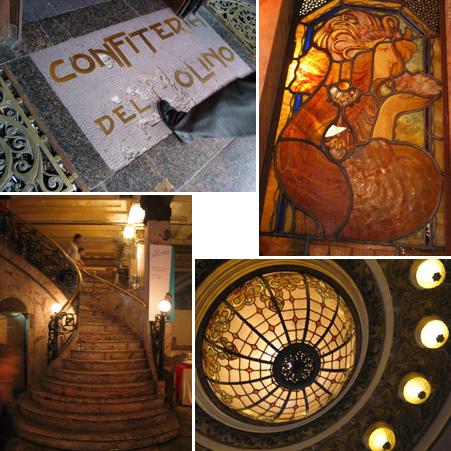 Given its location at one of the most important intersections in the city center & adjacent to Congress, the Confitería del Molino quickly became the success Brenna had envisioned 20 years earlier. Politicians, tango celebrities like Tita Merello, foreign dignitaries, literally everyone hung out there.

Unfortunately, business began to decline in the 1950’s & each coming decade brought new challenges for the Brenna family. Shortly after filming a scene for the Alan Parker version of “Evita” plus a video for the Madonna release “Love Don’t Live Here Anymore,” the Confitería del Molino closed its doors forever in January 1997. The building sat disintegrating for decades, but restoration plans are almost complete in 2020. One day soon, we may be able to enjoy a coffee & pastry here just like porteños from bygone days. 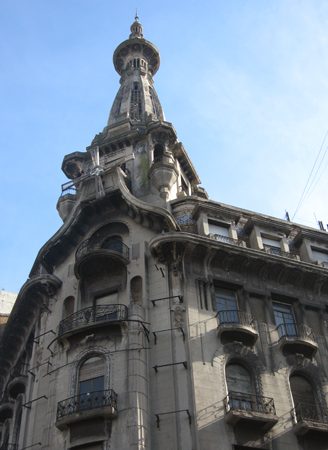 Art lovers should take a peek inside the tomb for one of the finest mosaics in the cemetery: 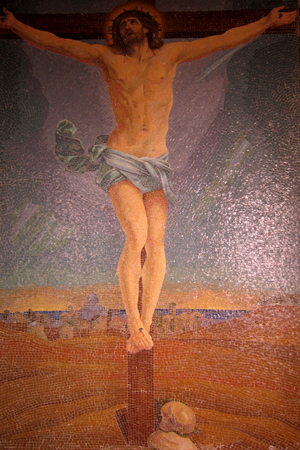 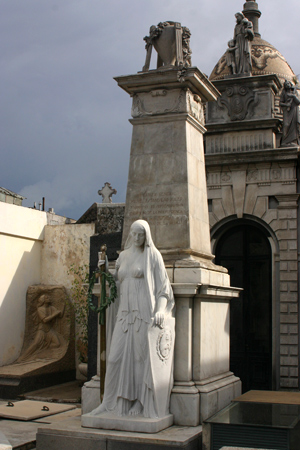 Promoted to the rank of general during the independence wars, Miguel Estanislao Soler switched hats between military officer & politician several times during the nation’s early years. Soler passed away in 1849, but his monument was erected in 1929 & paid for by the city of Buenos Aires. At the top of the column, places & dates of military campaigns tell visitors a bit about the man’s service to his country. 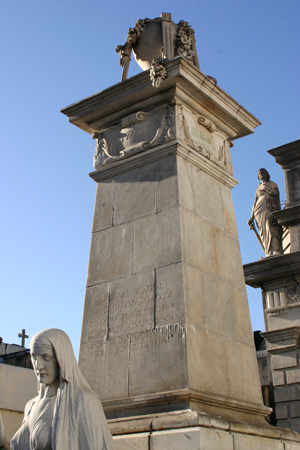 But the statue—generally attributed to Torcuato Tasso—is breathtaking. Situated at the entrance gate, it is one of the first pieces of art seen by visitors. A few allegories are present: military action (the sword), victory (a wreath of laurel) & Argentina (shield with the nation’s coat-of-arms). Although it’s tempting to rush inside & wander the walkways of the cemetery, stop for a moment & examine this beautiful statue before diving in. 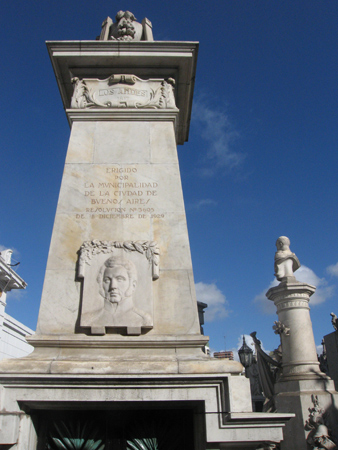 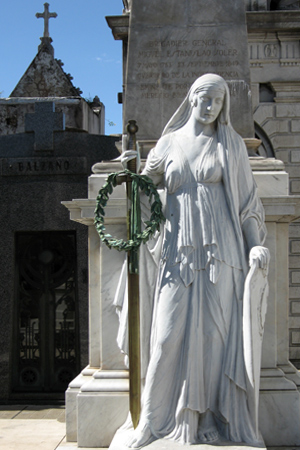 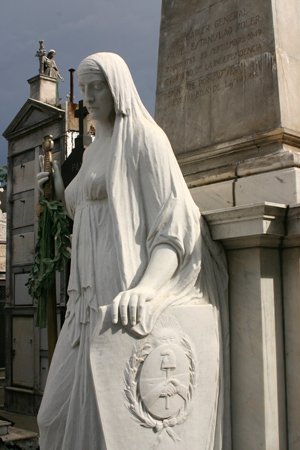 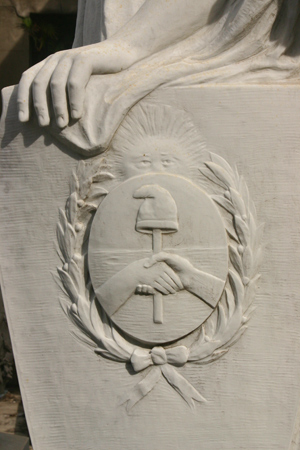 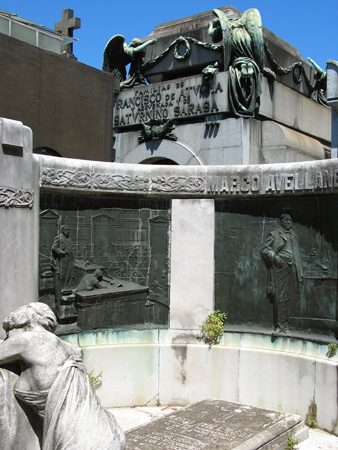 Imposing but built on one of the more narrow paths of the cemetery, the mausoleum for the Familias de Francisco de Atucha y Azcuénaga y de Saturnino Sarasa is notoriously difficult to photograph. Even more difficult to see is the beautiful stained glass window inside… but it’s worth the effort: 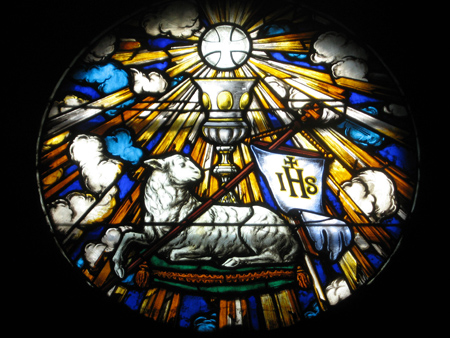 At the beginning of the 20th century, Jorge Atucha purchased some 35,000 hectares from the Duggan family. The estate, located on the northern border of the Provincia de Buenos Aires, took the name “El Pelado“—perhaps Jorge was balding at the time!—& soon became a thriving cattle ranch. The family’s fortune grew when a branch of the Urquiza train line arrived to the estate in 1913 & carried its products to the capital. The station was named Sarasa after the last name of Jorge’s mother. 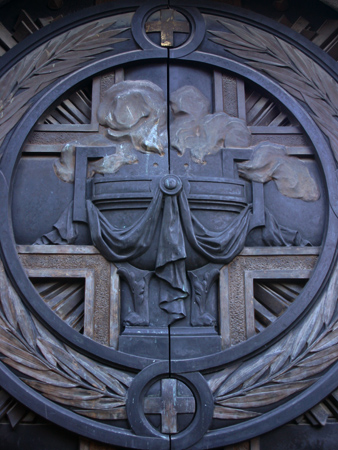 As the estate grew, so did the number of people needed to work it. By 1925, a small town began to emerge in order to provide services to estate workers. Unfortunately “El Pelado” did not survive the political & economic crisis following the departure of Perón. In later years, the last military dictatorship stopped train service, & the town currently has a population of under 100 people. 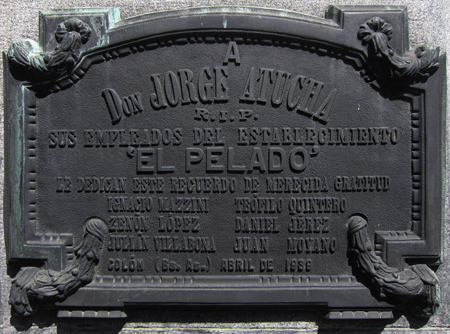 But the estate is still recognized as one of the oldest & best breeders of thoroughbred race horses in the nation. And in spite of fortunes that come & go, the Atucha family obviously did very well for themselves. Their tomb was designed by French architect René Sergent, although he never visited Buenos Aires. The beautifully crafted door & crowning angels would certainly draw much more attention if this tomb had been built on a main walkway. 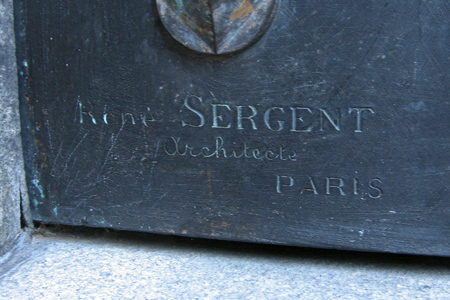 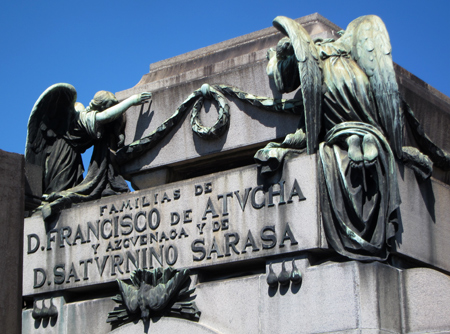 When the Atuchas spent time in Buenos Aires, their residence was located near Recoleta Cemetery on chic Avenida Alvear… just opposite the Palacio Ortiz Basualdo. Sold long ago, the house was divided into several apartments & contains one of the few faux, painted façades in Buenos Aires & is easily visible from busy Avenida 9 de Julio. 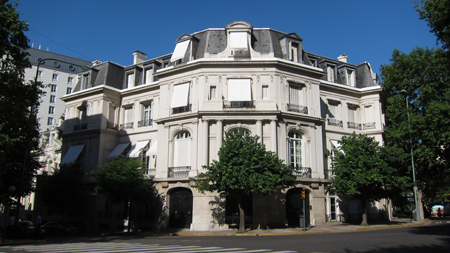 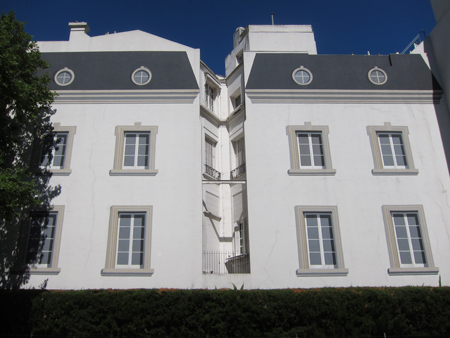 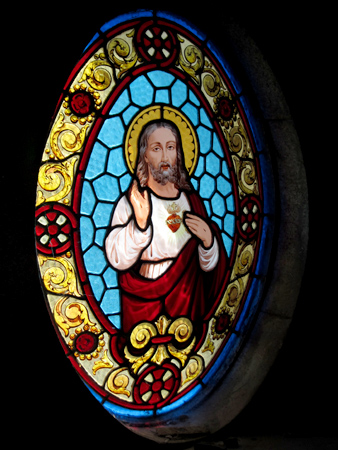 Published by Robert on 3 December 2012

Juan Bautista Alberdi lost his mother during his birth in 1810. Then at the age of 11, his father passed away. Soon after, Alberdi left his native province of Tucumán after receiving a grant for studies in Buenos Aires. But he wasn’t always thrilled with education. Abandoning school for a bit to pursue interests in music, he eventually returned & received a degree in law. Juan Facundo Quiroga offered to pay his further studies in the USA, but at the last moment Alberdi decided not to board the ship.

Remaining in Buenos Aires, Alberdi formed a literary group with Marcos Sastre to debate local politics & European trends. Hugely successful, a loosely-veiled criticism of Juan Manuel de Rosas forced Alberdi into exile in Montevideo. After a brief stay in Paris where he met José de San Martín, Alberdi decided to move to Valparaiso & worked as a lawyer while writing articles for Chilean newspapers.

Upon hearing of the defeat of Rosas, Alberdi quickly wrote his most influential book: “Bases y puntos de partida para la organización política de la República Argentina” or “Foundations & Points of Reference for the Political Organization of the Argentine Republic.” Sent to Urquiza, the book outlined a basis for a constitution that would be adopted the following year.

Fully supporting Urquiza’s confederacy, Alberdi was sent to Europe as an official representative of Argentina. During the 24 years he lived abroad, Alberdi met many foreign leaders & gained the new nation the recognition it desired since the days of Rivadavia. But when Bartolomé Mitre defeated Urquiza in 1861 the Confederacy came to end as did Alberdi’s employment. Mitre refused to pay him two years of salary or even his return passage!

Again living in exile, Alberdi supported Paraguay in the War of the Triple Alliance based on the fact that English capital seemed to be behind the conflict. He always stood for law & justice over economic manipulation of politics. Only in 1879 under the presidency of Nicolás Avellaneda could Alberdi finally return to Argentina as a Representative in Congress for his native province of Tucumán.

Mitre used his influence to oppose Alberdi constantly. Roca decided to name Alberdi as Ambassador to France, but he failed to receive approval from Congress due to intervention from Mitre. Disheartened, he left again for France in 1881 & died there three years later. Alberdi’s remains were repatriated in 1889 to Recoleta Cemetery but moved again in 1991 to the provincial government building in San Miguel de Tucumán (photo below). The quote on his new tomb translates to: “Will that is not educated for peace is capable of neither liberty nor government.”

This crypt was declared a National Historic Monument in 1946.

Update (Oct 2020): While the topic of Freemasons & their legacy in Argentina is not a focus of this blog, the former tomb of Alberdi has acquired new importance as a cenotaph. Active for Freemasons around the world, the Gran Logia Argentina paid for the tomb’s restoration in 2017 & donated a plaque to commemorate Alberdi’s service:

Images shown are a mix of photos taken before & after restoration.