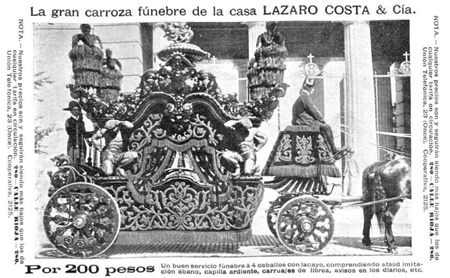 The show must go on… even if you aren’t around to see it. Important funeral homes like Lazaro Costa offered rental carriages for grand processions to Recoleta Cemetery. The above photo appeared as an advertisement in the society magazine “Caras & Caretas” with the following text:

Although a friend sent me this photo & did not record the publication date, surely this is from the early 20th century. Assuming this could be from 1915, 200 pesos would be the equivalent of $83 USD, or $1,930 USD in today’s currency! 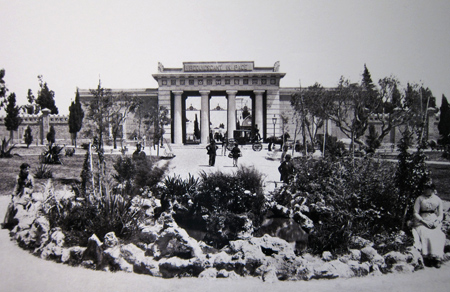 Photo taken by Samuel Boote, circa 1885, & part of the Colección Carlos Sánchez Idiart. The entrance gate had just been remodeled by Juan Antonio Buschiazzo four years earlier, so it looks practically new in this photograph. Grottos were all the rage in late 19th century Buenos Aires, so naturally Recoleta had a few for rest & relaxation. A gem of a photo. Photo #358 from the Colección Witcomb, date unknown. This capture shows the same perspective as another historic photo but much later… judging from the increasingly urban character of Buenos Aires visible towards Calle Azcuénaga in the background.

Update (10 Apr 2013): Something always bothered me about this photo. The single landmark I could find for orientation is facing the wrong way. How can that be? And the height from which the photo was taken means the photographer shot from the bell tower of the Iglesia del Pilar… there’s absolutely no other possibility, past or present.

Remembering that original images were from glass plate negatives, perhaps flipping the image horizontally in Photoshop would fix things. It did; everything fell into place. Below is how the image should look: 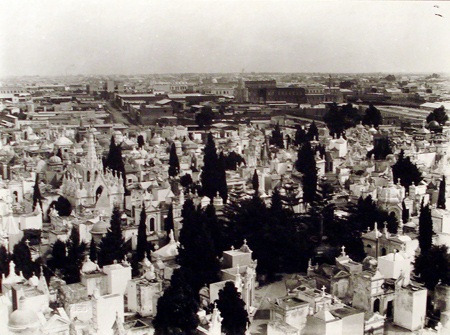 Harry Grant Olds (1869-1943) was one of the most successful early photographers of Buenos Aires, coming to Argentina in 1900 after a brief stint in Valparaiso, Chile. This photo was taken in 1900 in the northwest corner of Recoleta Cemetery. Of note are the large mausoleum for the Familia del Carril, the monument to federal judge Virgilio M. Tedín &—although blending into the trees a bit—the memorial to Luis Viale.