Born in Buenos Aires in 1794, Juan Cruz Varela was sent by his parents to Córdoba to become a priest. But Varela completed his studies in 1816 just as Argentina won its independence from Spain & so chose to participate politics & literary ventures instead. Many scholars have classified his odes & tragedies as the best early Argentine literature written. Works often tackled the topics of the day, mainly the revolutionary wars & struggles of the new nation. In “Canto lírico al triunfo de Ituzaingó,” Varela describes General Carlos Alvear‘s victorious battle against Brazil & later wrote a eulogy for Manuel Belgrano:

As a friend & admirer of first President Bernardino Rivadavia, Varela was forced into exile with Rivadavia’s political defeat & the rise of Rosas. He died in Montevideo in 1839, & his remains were brought to Recoleta Cemetery after the defeat of Rosas. An equally interesting descendant of Varela also buried in the family tomb is Dalmiro Varela Castex. A large plaque hints to his importance: Dalmiro imported the first vehicle to Argentina in 1888, a steam-powered De Dion Bouton tricycle. In 1895 he imported a petrol-powered Benz four-wheeled vehicle & sold the tricycle to Marcelo T de Alvear. Importing & selling vehicles would become Dalmiro’s passion. In 1904, he founded the first automotive group, the Automovil Club Argentino (ACA) & was issued the first driver’s license in the nation: For more info on Dalmiro & the history of automobiles in Argentina, Daniel Costa Deschamps has written an interesting memoir on the topic (in English). Above photo courtesy of prewarbuick.com. This tomb was declared a National Historic Monument in 1946.

Update (08 Feb 2012): Apparently this tomb was downsized. Part of the original gate was maintained & the mourning woman statue placed on top of the whole structure. It’s always looked a bit odd to me & thanks to photo #371 of the Witcomb Collection now I understand why: 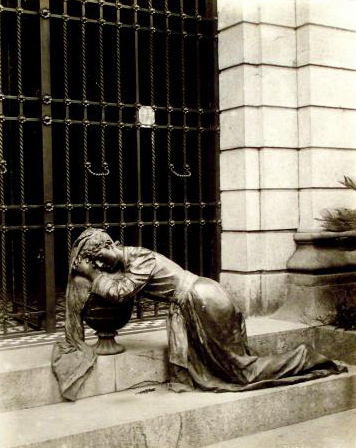