Wonderfully Art Nouveau & set in a prominent location, Rufina draws lots of attention. But the story of her bizarre death is also a well-known urban legend of Recoleta Cemetery.

The statue of Rufina depicts her at the age of her death: 19 years old. The Cambacérès family was upper class thanks to a large cattle fortune. Rufina’s father, Eugenio, was originally from France & became a semi-famous Argentine writer. He died in Paris when Rufina was only 4.

Fast forward to her 19th birthday in 1902. Rufina’s mother threw her a big party, & afterwards they were all supposed to go to the Teatro Colón to catch a show. But while getting ready, Rufina suddenly collapsed in her bedroom & doctors pronounced her mysteriously dead.

The following day she was buried in Recoleta Cemetery. Here’s where it gets interesting… a cemetery worker later reported that he found Rufina’s casket lid pushed aside & broken. Her mom feared the worse & thought Rufina had been accidentally buried alive. Another version of the story claims that Rufina somehow escaped from her tomb & made it to the front gate… only to die from a heart attack caused by fright. What really happened? It’s impossible to find out 100 years later. Some claim that while preparing to go to the opera, Rufina’s best friend let a secret escape that killed her: Rufina’s boyfriend was also seeing her mother! Shocking. The casket damage could be attributed to robbery since Rufina would have been buried with her finest jewelry.

Something else about the story doesn’t fit. The original location of the Teatro Colón on Plaza de Mayo closed in 1888, & the new theater opened in 1908 twenty years later. So Rufina may have been preparing to see a performance, but it certainly was not at the Teatro Colón.

Whatever version of this urban legend you’d like to believe, some of it must be true. Notice how Rufina is depicted with her hand on the door. Is she trying to escape an awful fate? Be sure to look in the mausoleum’s side door for much more Art Nouveau flowery decoration. The marble casket & chandelier are particularly stunning: Update (10 Dec 2012): Finally getting around to looking at the obituaries in the weekly social magazine Caras y Caretas. In the 07 Jun 1902 issue—immediately following Rufina’s death—the following article appeared: 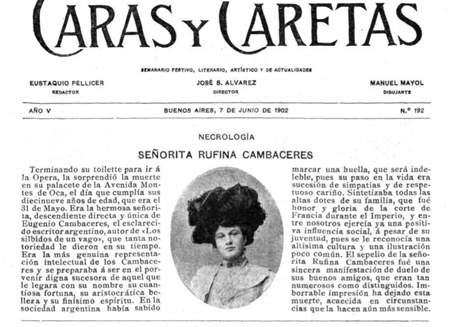 “Preparing to go to the opera, death surprised Rufina in her mansion on Avenida Montes de Oca, the day she turned 19 years old on May 31st. The beautiful miss was the direct & only descendant of Eugenio Cambaceres, the capable Argentine writer, author of ‘Los silbidos de un vago‘ which gained him such notoriety in his day. She was the most genuine, intellectual representation of the Cambaceres family & was preparing herself to become a worthy successor of a sizable inherited fortune, her aristocratic beauty & her refined spirit. An empty space was left in Argentine society that will be indelible since her life was a series of kind acts & respectful caring. She combined all the highest gifts of her family, who were the honor & glory of the French royal court during the Empire, & among us she exercised a positive social influence, in spite of her youth, since she possessed a high level of culture & a rare countenance. The wake of Miss Rufina Cambaceres was a sincere demonstration of sorrow from her good friends, who were as numerous as they were distinguished. This death has left an unforgettable impression, occuring under circumstances that make it even more tragic.” Update (14 Jun 2018): Life stories about the residents of Recoleta Cemetery can inspire others, & that was the case for Pablo Sura. He contacted me last year to share his experience on a visit to Recoleta Cemetery, during a trip to Buenos Aires from Neuquén. Pablo felt so touched by the image of Rufina that he wanted to dedicate a work of art to her… a painting to share with everyone. Last month he presented the image inside Rufina’s former home in Barracas . Great work, Pablo! 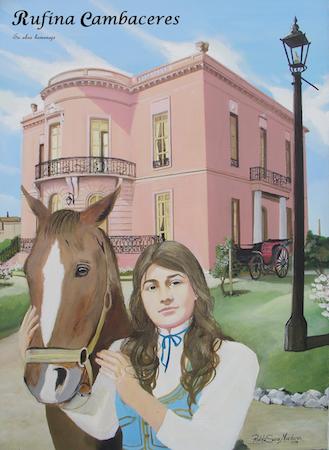 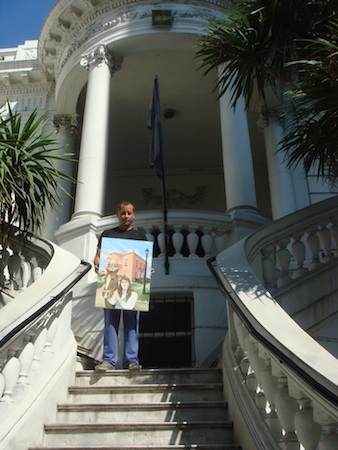